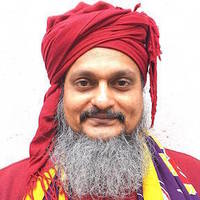 Guruji’s mother Devaki Kanakamma was his first guru and spiritual teacher, and she trained him in yoga from early childhood with the help of his father Dr. Thomas Thankappan. His mother was from a Hindu family (Kavil family) and his father was from a Christian family (Nadayil Family). From his school years, Guruji was active in Yoga, sports, games, martial arts, dance, music, singing, acting, drawing, painting, climbing, trekking, alternative medicines, gardening, organic farming, interfaith spiritual discussion groups, and other selfless community services.

Guruji’s parents send him to different masters in order to learn different advanced yogic techniques and other art forms. As a sport and art lover, he has represented his schools, colleges, and university nationally. He received numerous certificates, medals, and awards including the first prize for the cultural program from the national level Annual Leadership Course and Rock Climbing camp which was organized by National Cadet Corps (NCC- an organization within Indian Military). Guruji was a member of NCC for 7 years and held different positions as Cadet, Corporal, Sergeant, Sergeant Major, and Senior Under Officer and received A, B & C certificates.

Guruji was a spiritual traveler from his young age, In his yogic life journeys, he met and learned from self-realized Himalayan masters, saints, honored yogis, Sidhas from South India, artists, and alternative medical doctors. Having experienced a yogic lifestyle for over 50 years, Guruji lived in Himalayan caves, ashrams, and palaces as well as living under Gurukula (guru-shishya-sampradaya), and modern educational systems. He is a scholar in modern and ancient techniques of yoga, meditation, and other yogic healing techniques. Guruji received numerous spiritual & religious honorary titles from different spiritual masters & organizations. In 1989 on the day of Guru Purnima, he ordained as a “Guru” (Spiritual Master) by Avadhuta His Holiness Sadguru Paul Muni Bharath and send Guruji to different masters and spiritual centers in order to promote Universal Spirituality.

On June 23rd, 2007, at the “World Peace Festival / World Yoga Festival” which was held at the Consulate General of India, New York, Yogiraj Jagatguru His Holiness Swami Bua Ji Maharaj announced that “Guru Dileepji is a great spiritual master for the World” and that his yoga, interfaith & culture of peace activities are helping the global community. On July 29, 2007 (Guru Purnima Day), His Holiness Swami Bua ordinated Guruji as his successor with the title “Jagatguru” (Universal Master) from his traditional and spiritual lineage. Guruji is the only person took “Sanyasa Diksha” (monkhood) from Yogiraj Jagatguru His Holiness Swami Bua Ji Maharaj.

Guruji is involved with numerous NGOs around the world and a mentor for many people. He was the International Ambassador for International Yoga Federation and World Yoga Council from 2004 to 2010. He is the US representative to the Universal Parliament of Religions, in Argentina, Honorary Advisor of the “World Yoga Foundation”, Advisor of Global yoga Alliance in India, and a Trustee of the “All Faiths Seminary International”. Guruji is an active yogi in social media and serving people globally. He was an NGO representative to the ECOSOC, United Nations in 2015 and 2016. Currently, he is the Secretary of the Committee of Religious NGOs, Vice President of the UNSRC – Salus Wellness Network at the United Nations HQ, and Main NGO Representative of the World Yoga Community to the United Nations. He often performs mantras & prayers at the Borough halls & constantly interacting with international politicians, artists, Rabbis, Swamis, Gurus, Bishops, Imams, Monks, diplomats including high officials from the United Nations.

Guruji is an honorable guest speaker at numerous international conferences, events, festivals and he was a judge in many international yoga asana competitions. He is a recipient of several peace awards and titles for his yogic services to humanity. He is considered to be a new age celebrity yogi and humanitarian having multifaceted talents and a wide range of friends from homeless people he serves to diplomats. He often gives discourses and is interviewed by media around the world. Currently, Guruji is conducting social, cultural, and yogic lifestyle-related classes, events, workshops, meetings, and festivals in New York City. His mission is to cultivate global peace and harmony through yogic life teachings.

His vision is to fulfill the ancient Vedic wisdom of great masters from India and create a global family “Vasudaivakudumbakam”. He follows the teachings of Mahatma Gandhi “Simple Living and High Thinking”, the teachings of Swami Sivananda Saraswati “Love All, Serve All”, and the teachings of Mother Teresa “A Smile Can Change The World”.